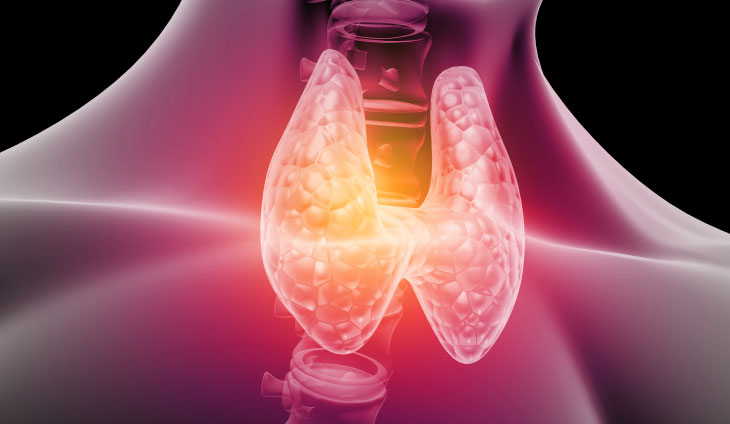 Why you should not IGNORE Thyroid?

The thyroid is an endocrine gland in our body. It is responsible for the secretion of important hormones that influence the metabolic rate and help in protein synthesis in the body. This gland is located in the front part of the neck. When the thyroid gland functions normally. It is termed as Euthyroid, but due to certain abnormalities in the production of hormones Thyroid disorders are broadly divided into Hyperthyroidism and Hypothyroidism and also can lead to other disorders like Goitre and cancer.

Both forms of the disorders can be passed down through generations and are hence inheritable. Hyperthyroidism results in excess energy being used by the body due to higher production of the hormones, thereby resulting in body weight loss, increased appetite and higher heartbeat coupled with anxiety, on the other hand, Hypothyroidism results in lower appetite, low energy usage by the body, excessive weight gain and low heart rate. It is well documented that with more than 1 million cases per year in countries like India and more than 20 million cases of some form of thyroid disorder in the USA, care and constant routine medical checks are needed to keep such disorders within the check. It is noted during a study that women are 5-6 times more susceptible to Thyroid related disorders than men, this can be due to the many hormonal changes a woman undergoes during her lifetime, but the exact cause for such an occurrence is not known.

Goitre on the other hand is due to irregular growth of the thyroid gland. This is typically due to Iodine deficiency or inflammation within the gland. Sometimes due to inflammation, a few lumps are seen on the gland and these are called Thyroid nodules. According to a new study published in the online issue of Neurology, severe underactive hypothyroidism may lead to a possible risk of dementia in affected patients. Proper treatment is available by using medicines to balance out the levels of hormone production or even under certain conditions the thyroid gland is removed and the patient is asked to be under medication for the rest of their life.

A few essential steps are to be followed to decrease the chances of getting diagnosed with a thyroid disorder; A well-balanced diet, routine medical check-ups, prevention of exposure to the thyroid region during X-rays or any other radiation therapy, Consulting your medical expert on selenium supplements, reduce intake of soy and reduce/stop smoking. Thyroid disorders are like a sleeping giant, wherein people affected with it at times are not even aware of their circumstances, due to which there may be a delay in their treatment process. Eat healthy, routine checks and taking precautions can go a long way in reducing its occurrence.