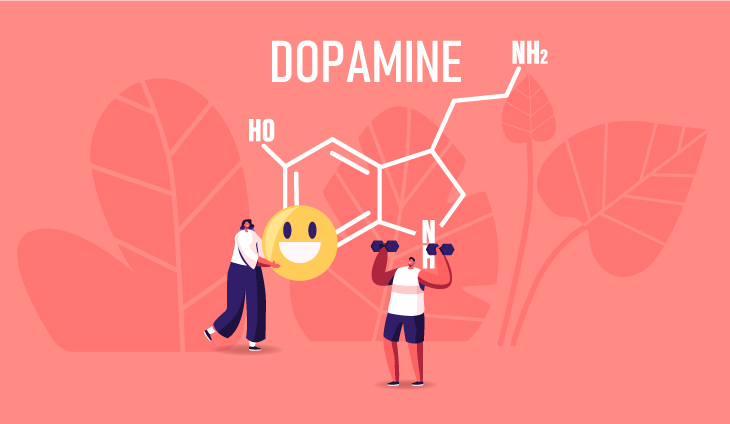 Dopamine is a neurotransmitter that is made in the brain and is released by the hypothalamus and acts as a unique chemical messenger thereby communicating messages between the nerve cells in the brain and to the rest of the body. This was discovered in 1957 in Lund by Arvid Carlsson. Why is this unique? Because it acts as a reward centre thereby actually motivating us to achieve more or to do something that makes us happy. It helps regulate memory, muscle movement and mood including paying attention to our bodies. Now the old saying goes hand in hand here, ‘where too much or too little of anything can cause harm to our bodies. Dopamine too falls into this category. Too much or too little dopamine can lead to;

A fun fact about Dopamine is that it is produced both in the kidneys and the brain. The dopamine from the Kidney acts as a hormone and like adrenaline, it plays a role in the fight or flight response of the body. Too much Dopamine can lead to Schizophrenia, which is a chronic mental health disorder where a person starts to experience hallucinations and delusions.

Dopamine being the wonder chemical and hormone is being used in medicine to treat some issues like low blood pressure, and septic shock and enable proper flow of blood to the body. Dopamine Agonists are drugs that mimic the natural neurotransmitter dopamine. They bind to the dopamine receptors and enable the nerve cells to react in the same way as they would in presence of dopamine. The opposite of such is called dopamine antagonists. These are used to block the dopamine receptors and are used in the treatment of bipolar patients.

The term Dopamine is often used along with Parkinson’s disease. Levodopa or L-Dopa had been approved by the FDA for use in the treatment of patients suffering from Parkinson’s disease. When cells that produce dopamine in the brain start to die, this relates to the lack of dopamine being produced in the brain leading to Parkinson’s disease. There is a reported 1.5 million people in the United States of America that are suffering from Parkinson’s. Nurses and Bedside Assistants have come a long way in helping and monitoring Parkinson’s patients and ADHD patients. Homecare services that appoint and train these nurses and assistants have come to help people treat their loved ones at their homes itself rather than opting for hospital admissions. Dopamine can be maintained through diet such as,